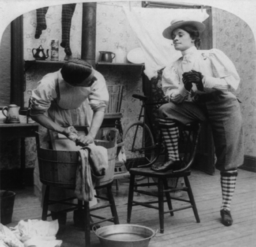 Katherine Bode has given us her introduction to How I Pawned My Opals and Other Lost Stories and, as the best introductions do, she gives us a greater appreciation of the work of Catherine Martin.

Martin’s family (the Macaulays) began their life in Australia as farm labourers but by the time Catherine moved to Adelaide in 1876, aged 29, she was well educated, fluent in a number of modern languages, particularly German, and widely read in literature, theology and philosophy. Although Martin escaped the extreme poverty of her childhood, she had to work to support herself for much of her life.

Catherine married Frederick in 1882, when she was 34. He was an accountant, social reformer, and writer. The marriage seems to have been a happy and equal one. They shared a belief in social justice, a desire to write and, and together they travelled the world. Martin described Frederick and herself as “comrades”.

No wonder, then, that Martin’s stories have an independent and strongly delineated female character at their core. These women are different in so many ways but they are all decisive and determined, and resist or actively go against the mores of their respective societies.

It is Bode’s fascinating insight that although Martin, with her depiction of Stella Courtland in her most famous work, An Australian Girl, has long been seen as responsible for creating a uniquely Australian form of the ‘New Woman’, these lost stories show that she conceived of this figure as a global phenomenon, an emerging sisterhood of women independent in thought and action.

We are looking forward to introducing these women to you!

Photo: Satirical photo from 1901, with the caption ‘New Woman—Wash Day’, US Library of Congress.