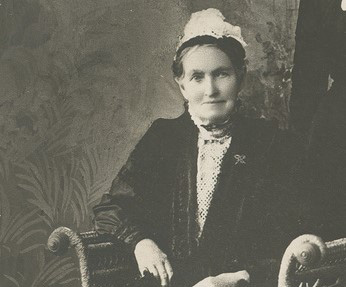 Catherine Martin was not as well-known and appreciated as she deserved to be when she was writing from the 1870s to the 1920s, partly because so much of her work was published anonymously or under a pseudonym. Her most popular book, The Australian Girl, was published in 1890 under the name ‘Mrs Alick Macleod’.

She has also suffered in hindsight through comparisons with her contemporary and friend Catherine Spence whose 1854 book Clara Morison: A Tale of South Australia During the Gold Fever was the first novel about Australia written by a woman. Spence also fought for female suffrage as vice-president of the Women’s Suffrage League of South Australia (South Australian women were enfranchised in 1894). So while Spence had her portrait painted by Margaret Preston, appeared on a stamp in the 1970s, and was the face on a commemorative Centenary of Federation five-dollar note in 2001, Martin is largely forgotten.

We can’t give her a stamp, but our collection of Martin works How I Pawned My Opals and Other Lost Stories will introduce her work to a new generation of, hopefully more appreciative, readers. It will be available in November.